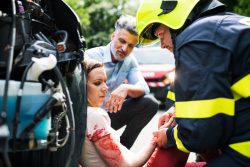 
Personal Injury Attorneys serving clients throughout Bucks County and Northeast Philadelphia for over 40 years When you’ve been in a car accident, there are often many facets to making sure that your car and your physical health are properly taken care of. According to the Insurance Research Council’s (IRC) Auto Injury Insurance Claims Study, the


School buses have been established to be the safest way to transport children to and from school by The National Highway Traffic Administration, and incidents of school bus accidents are rather rare, however there are instances of children, drivers, and pedestrians being seriously injured in School Bus Accidents. About 17,000 children visit emergency rooms annually

Report Shows Motor Vehicular Traffic Deaths Are On The Rise


Earlier this month The U.S. Department of Transportation’s National Highway Traffic Safety Administration(NHTSA) released its preliminary report on overall road safety in the country for 2015. Although the data has not been completely finalized, some of the numbers included in the report are alarming. Motor vehicle traffic deaths in 2015 grew by roughly 8 percent from


A multiple-vehicle accident involving two trucks and several other vehicles caused a significant disruption on one of Northeast Philadelphia’s major highways recently. The aforementioned collision occurred on I-95 South approaching Cottman Avenue in Northeast Philadelphia shortly before 6:00 a.m. on Tuesday, November 10th. The accident reportedly involved two trucks, as well as several other vehicles,


Police, Fire, and Emergency Medical Services arrived on the scene of a fatal car accident that occurred in Upper Southampton, Bucks County earlier this morning. Details of the accident remain undisclosed, but officials have determined that the crash occurred at approximately 9:45 a.m. on Wednesday, November 4th, in the 1700 block of Bustleton Pike in Upper Southampton. Thus far,