Staged Car Accidents in North Philly: What You Need to Know

Our Attorneys can guide you on the steps to follow if you suspect that an auto accident that appears to be your fault seems to be an intentional collision caused by another driver or drivers. 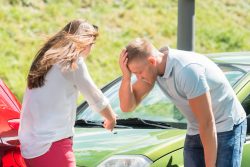 In a crowded urban area like Philadelphia, auto accidents are often difficult to avoid. While normal car accidents on city roads and freeways are dangerous enough, they can become even more destructive when they are caused on purpose by criminals attempting to cash in on a victim’s auto insurance policy. According to the National Insurance Crime Bureau, such scammers cost the auto insurance industry billions of dollars each year.

If you are in an auto accident like the types below, you may be the victim of a fraudulent scheme. It is important to know the techniques for staging an auto accident that puts the victim technically at fault for the collision. Educate yourself about common schemes and signs of staged accidents.

There are numerous types of staged accidents. One is a start and stop. The start and stop scam takes advantage of heavy traffic such as is found during rush hour in Philadelphia. In this type of scam, the scammer is in front of the victim. The car in front accelerates as if traffic has cleared in front of them. Suddenly, they slam on their brakes, and the car behind runs into their rear fender. In this case, the driver in the front car takes advantage of a rear driver tailgating and causes a fender bender or more serious accident; the rear driver is responsible for covering property damage and personal injury, and it is almost certain that the driver of the front car will claim injury.

Another type of staged accident is a T-bone. In this, a scammer will wait for a car to enter an intersection after stopping at a stop sign. Then, the car with technical right-of-way coming from the cross street will accelerate to hit the side of the victim’s car. The scammer will claim that the driver did not stop at the stop sign; and, again, they will likely claim personal injury. The victim (the car leaving the stop sign) will be responsible for covering the costs of auto damage and personal injury.

Yet another example of a staged collision is the swoop-and-squat. In this scam, more than one car is involved in the scheme. In this case, the victim is behind a car involved in the scheme, called the ‘squat’ car. Another car swoops in, appearing to cut off the squat car in front of the victim; this car swooping in is also part of the scheme. When the squat car slams on their brakes to avoid the swoop, the victim at the rear runs into the back of the squad car. The car that swept in then speeds off. Another example of the swoop-and-squat occurs on freeways, and even more, vehicles are included in the scam. In this scenario, the squat car in front of the victim is cut off by a dangerous lane-changing car ahead (involved); additionally, two more involved cars are on either side of the victim’s car to block any out-route that would help the victim avoid crashing into the squat car from the rear. The squat car driver will claim that the victim was tailgating and likely claim personal injury to add to the amounts of insurance payout they seek.

In addition to the type of accident showing signs of being a staged event, there are other things that may tip you off to a scheme at hand. One is that the driver and people involved in the accident claim moderate to severe head and neck pain following a relatively minor collision or exaggerate the extent of the accident in police reporting. Another is that people show up after the accident immediately, such as insistent witnesses or tow trucks. These people may also be involved in the scheme.

Staged auto accidents are unfortunately a criminal industry. Scammers target older drivers and women, as they perceive that they will be less likely to confront the scammer after an accident. Older drivers and women are also perceived to be more likely to take responsibility for the accident given the technicality of fault.

How to Protect Yourself from Auto Collision Fraud in Pennsylvania 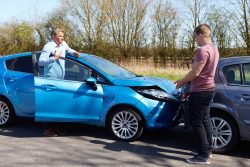 Fortunately, there are ways to protect yourself from such accident scammers. First of all, don’t tailgate! Maintain a safe distance and drive defensively. After an accident, one of the most important things is to document the accident by taking pictures of the state of each car, the location, anything that details the climate, etc. Additionally, obtain the contact information of all witnesses at the scene of the accident. Make sure you contact local or state authorities to file a police report immediately following the accident while all involved parties are present. Give as detailed an account as you can, and do not claim fault. Having a skilled accident lawyer on your side will help protect you from the malevolent interests of a car insurance scammer.

Have you been involved in an accident, and you think is a scam? Contact our PA Personal Injury Lawyers for a free consultation today

The importance of having a skilled auto accident attorney can’t be understated. Have you been in an accident that appears to be your fault, yet you suspect it was staged? We can help. At Kamensky, Cohen, & Riechelson, we understand how important it is to be protected when you’re on the road, in all ways. We successfully represent clients in towns like Crescentville, Tacony, Buckingham, Fairless Hills, and similar towns near Northeast Philadelphia & Lower Bucks County to fight auto insurance scammers.

Contact us at (215) 337-4915 or fill out our online contact form for a free consultation to discuss your staged accident case and explore the options to protect your rights.