If an Accident or Someone Else’s Negligence Caused Your Scarring and Disfigurement Injury, You may be Entitled to File a Claim for Damages. Our Lawyers Assist Injured Victims in Newtown, Yardley, Bensalem, Croydon, and Northeast Philadelphia. 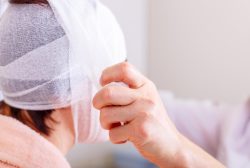 Serious injuries caused at work, in a car accident, or due to someone else’s carelessness can leave you with facial scarring and disfigurement as a result.  These injuries can be devastating both physically and emotionally.  Corrective surgery is costly and may require several kinds of treatments. Our personal injury lawyers can work to recover damages for your financial expenses as well as pain and suffering for the emotional toll your disfigurement has taken on you.

Many types of facial scar injuries are related to broken bones such as the skull, jaw bone, cheekbone, orbital bone, alveolar ridge (located between the nose and mouth), TBI (traumatic brain injuries) accompanied by open skull fractures. Soft tissue injuries to the face include facial lacerations (deep cuts), more minor cuts or scrapes, and nerve damage that affects the injured person’s ability to move their face to do things such as swallow, bite, smile, or blink.  Facial burns caused by heat or chemicals can leave scars as well.

The principal cause of facial disfigurement is car accidents or pedestrian accidents. Broken glass, hitting the dashboard, being ejected from the vehicle, flying objects, or the airbag can cause facial injuries.  Motorcycle and bicycle accidents have a high number of facial disfigurement accidents, which are exacerbated when the rider isn’t wearing a helmet.  Trips and falls, dog attacks, and workplace accidents also fall high on the list.

Physical, Emotional, and Financial Consequences of Scarring and Disfigurement

Physically speaking, the scars which cause facial disfigurement can range from somewhat noticeable to prominently seen. Hypertrophic scars start as red, thick, raised tissue.  These scars are usually less challenging to treat and can be significantly diminished with laser therapy, topical medicines, and dermabrasion.  Keloid scars are thick, raised scars that form tumor-like protrusions comprised of an over-production of collagen in the affected area after an accident. These scars are hard to treat and can cause severe psychological damage because if they are removed surgically, there is a possibility that they will return. Contractures occur when the injury is over a large area when the scar tugs around the skin, causing tautness.  This type of scar can affect mobility unless surgically removed and replaced by skin grafts.

The emotional or psychological damage to someone experiencing facial disfigurement is potentially irreparable. As a society, we constantly judge those around us based on our interpretation of beauty.  Several studies have shown that facial scarring and disfigurement cause a negative bias in most people who aren’t even aware they have. Victims of facial scarring and disfigurement suffer discrimination wherever they go. They have trouble getting a job, an apartment, or a partner. They are stared at and whispered about in public as the waitress or sales clerk stares at their scar instead of looking them in the eyes. Their identity becomes a scar, and they are perceived as less intelligent and untrustworthy. This can cause severe depression, isolation, suicidal ideation, cutting, and other forms of self-harm. A facial scar and disfigurement can devastate a person’s self-esteem, confidence, and outlook.

The financial damage to someone with a facial scar and disfigurement is sometimes insurmountable. Skin graft surgeries, reconstructive surgeries, physical rehabilitation, medications, and check-up visits can leave someone with hefty medical bills.  The loss is compounded due to lost wages or an inability to return to work due to the injury.

Damages for personal injury average between $40,000 and $150,000; however facial injuries and disfigurement can receive much more depending on the factors in each case.  All injury cases are unique to the victim, situation, and sustained damage.

The first thing to be considered is the severity of the injury. Under this category fall the type of injury, the possible long-term repercussions, the size, location, and the level of permanency of the injury or scar. The various medical treatments received, long-term effects, possible recovery time, and insurance coverage are also considered. Emotional damage such as depression, anxiety, stress, pain, interruptions to daily life, and how the injury has impacted your overall mental health. The person’s age and insurance coverage available are also factors. 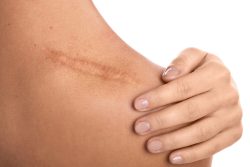 In 2021, a dog bit a twelve-year-old on her face, causing puncture and tear wounds to her face and scalp. The attack occurred in a public park when she was running, and the dog began to chase her. When she fell to the ground, the dog attacked. She required several surgeries because she injured the tissue around her right eye. She had several scars from the injuries.  Her parents were awarded $196,000.

In 2021, a 4-year-old boy fell off a swing at daycare and hit his head on a nearby bench, causing a deep gash above his right eyebrow. As a result, he developed a permanent and noticeable scar.  His parents sued the daycare for negligence, contending that there weren’t enough employees to watch all of the children closely.  They received an award of $75,000

In 2020, a $950,000 settlement was awarded to the family of a 17-month-old daycare student whose face, neck, chest, arm, and abdominal area were burned when he reached for a cup of hot tea from his teacher’s desk. His injuries resulted in significant scarring, skin grafts, and future painful surgeries to completely heal his burns.

In 2020, A 35-year-old man crossing the street was hit by a bus and suffered many broken bones, a ruptured spleen, and facial trauma.  His skull was fractured, his jaw was broken in two places, and most of the bones on the left side of his face were broken. His recovery was nothing short of miraculous, but he was significantly disfigured and had several scars on his face.  He will require more surgery and speech therapy to continue his arduous recovery. He received 1.3 million dollars in his settlement. The fact that the bus driver was texting while driving added to the demonstration of negligence on the driver’s part.

What Happens with Disfigurement Injuries in Workers’ Compensation Claims?

The Pennsylvania Workers’ Compensation Act provides guidelines for injuries on the job. To be covered by workers’ compensation benefits, the scarring or disfigurement is limited to the areas of the face, head, or neck, obtained from the injury itself and from surgeries done to repair the affected areas. The Act states that the scarring or disfigurement must be permanent and unsightly.  A scare is considered permanent if it has not faded after six months. The unsightliness of a scar or disfigurement will be decided by a judge based on the scar’s size, location, and shape, as well as the worker’s age.

It is also possible to receive compensation for emotional injuries developed during the recovery process. This is called a physical-mental disability. Specific loss benefits, a one-time lump sum payment may also be awarded depending on the circumstances of each case. Workers’ compensation procedures require the injury to be reported within 120 days to your employer.  There must be evidence that shows you were injured while working, and the damage is permanent.  If you are permanently disabled, you could receive permanent total disability benefits for up to 275 weeks.  The length of the term of benefits and the amount you will receive depend on your average weekly wage and the severity of the scar or disfigurement.

Dealing with the insurance company is a gigantic task.  How do you know their offer truly reflects what you need and how you are suffering from your injury?  Insurance companies are in the business of making money, so you can be pretty sure that what they are offering you is much lower than you deserve. Our Pennsylvania Scarring and Facial Injuries Lawyers can investigate your case, interview specialists, and ask about treatment plans and your prognosis.  We can stand firm when dealing with your insurance company and ensure you don’t settle for a low-ball sum. Our team can also work with you to organize your medical bills and other paperwork, ensuring you don’t miss any deadlines that could jeopardize your case.

Our Disfigurement Injury Attorneys in Northeast Philadelphia at Kamensky, Cohen & Riechelson know how to aggressively negotiate with the insurance companies, the lawyers and litigators defending the negligent parties against whom you are filing a lawsuit, and anyone else on the defense’s side to get the settlement that you deserve. When you are scarred and severely injured, you can feel helpless. We put the power in your hands and will work with you to get the maximum compensation amount for your psychological suffering, physical pain, financial losses, and medical needs past and future. Our accident lawyers are ready to assist you in Bristol, Fairless Hills, Doylestown, Langhorne, and throughout Northeast Philadelphia & Lower Bucks County, Pennsylvania.

Call today at (215) 337-4915 or fill out the online contact form to discuss your case and schedule a free, confidential appointment. We won’t get paid unless you win. You have nothing to lose and everything to gain.  Pick up the phone and ask for help.